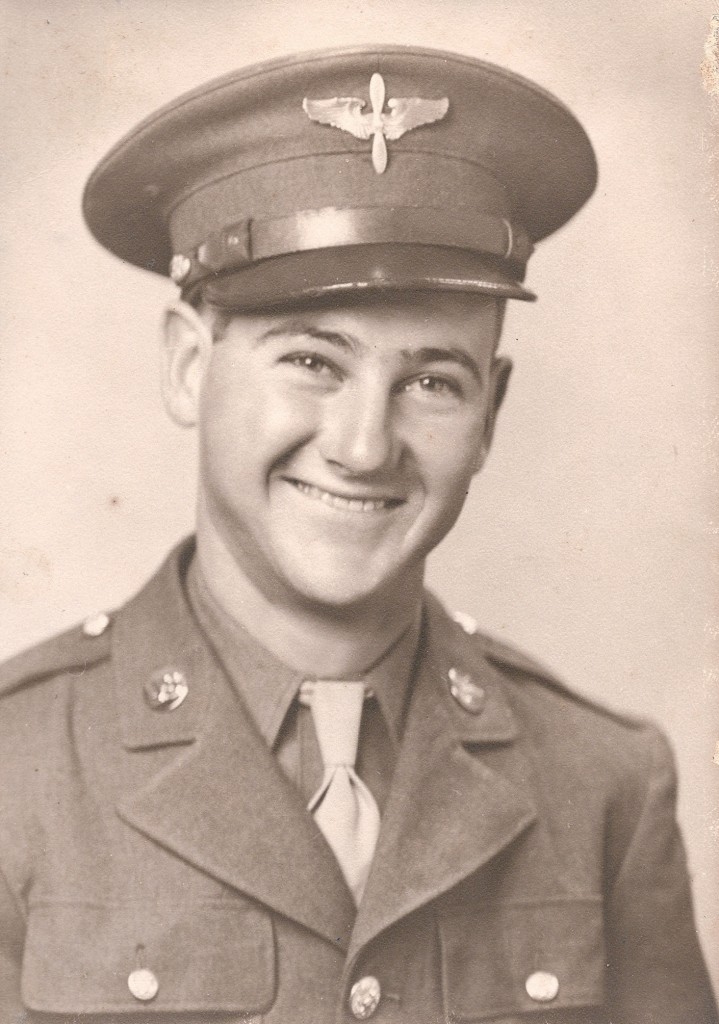 Sergeant Lubojacky’s body was found near the Czechoslovakian village of Merboltice on February 15, 1945. A partially opened parachute lay next to him. Where the Germans buried him remains a mystery.

Alfred Lubojacky, known to his family as Buddy, was born January 29, 1924, in Texas. He was one of eight children born to Joseph and Louise Lubojacky. Both his paternal and maternal grandparents had immigrated to the United States (US) from Czechoslovakia in the late 1800s. Alfred grew up working on the family farm and spoke both English and Czech.

In 1944 Alfred joined the US Army Air Corps and was trained as a B-17 “Flying Fortress” gunner. His brother, Roman, was already serving in the US Army in Europe. Before Alfred left the US for England in November of 1944, he travelled home to Texas for a visit with his family and his girlfriend, Katherine.

In England Alfred was assigned as a B-17 ball turret* gunner with the 8th Air Force, 306th Bomb Group, 369th Bomb Squadron, based at Thurleigh.

On February 14, 1945, the bombing target was the marshalling (railroad) yards at Dresden, Germany. After dropping the bombs, the B-17s were attacked by German Fockewulf (FW)-190 fighter planes. Machine gun and cannon fire from a FW-190 hit the right wing and fuselage of Sergeant (SGT) Lubojacky’s plane. SGT McDonough, the waist gunner, SGT Nahmias, the tail gunner, and SGT Lubojacky were wounded. The damaged B-17 was forced to drop out of flying formation.

Captain (CPT) Lewis, the pilot, knew the plane would not make it back to England. He decided to fly into Czechoslovakia and try to land behind the Russian ally front line there.

The situation in the B-17 worsened. Fires were burning in the fuselage and the Number 3 engine. CPT Lewis gave the order to bail out. While preparing to leave the plane, SGT McDonough saw SGT Lubojacky’s head above the ball turret escape hatch. He was conscious, but there was blood on his head. Lieutenant (LT) Whitelaw, the co-pilot, also saw SGT Lubojacky when he was climbing out of the ball turret. What happened to him after that is unknown.

CPT Lewis was the last to bail out. He set the plane to fly in a specific direction hoping it would come down in a unpopulated area. The B-17 crashed in a field near the Czechoslovakian village of Hridelec.

All the crew managed to bail out. Eight of the nine crew members became prisoners of war. SGT Lubojacky was killed.

In the early hours of February 14, 1945, and around the same time the B-17 crashed in Czechoslovakia, Alfred’s mother in Texas had a dream. In the dream he was crying, and she asked him what was wrong. He said, “I’ll never get to see Katherine again.”

A Western Union telegram dated March 3, 1945, informed the Lubojacky family that Alfred was missing in action.

Alfred’s family has never given up hope that they will someday locate his grave. And then they will bring him home.

Czech Republic historian, Milos Podzimek, wrote, “Alfred died on 14 February 1945 for our freedom in the country of his ancestors, but he will live forever in our hearts.” Milos and his son have done extensive and detailed research on Alfred’s plane. Their information has been invaluable in putting together the story of the fate of the B-17 and its crew.

Story as told to me by Walter Lubojacky, Alfred’s brother. The photographs and story are posted with his permission.

After no further information was found indicating that he was alive, SGT Alfred S. Lubojacky was officially declared killed in action a year later on February 15, 1946.

All of Alfred’s B-17 crew members and his brother, Roman, returned to the US after WWII ended.

In 1993, Czechoslovakia formally separated into the Czech Republic and Slovakia.

* Ball turret — a rotating, manned, gun turret mounted on the underside of a  US B-17 “Flying Fortress.”