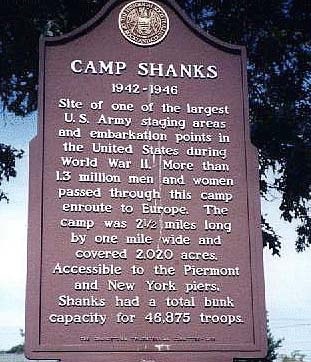 Camp Shanks was located in Orangeburg, New York, about 30 miles up the Hudson River from New York City. It served as a staging area to equip United States (US) military units in preparation for their embarkation to the European Theater of Operations in WWII.

US Army bombardment groups, infantry divisions, armoured divisions, medical groups, and other military units passed through Camp Shanks. The average stay was 12 days. It is estimated that 75% of those who took part in the Normandy, France, D-Day invasion on June 6, 1944, had been billeted there.  One unit that was in transit at Camp Shanks was the 101st Airborne Division, 506th Parachute Infantry Regiment, E (Easy) Company.  Easy Company later became well-known in the Stephen E. Ambrose book Band of Brothers and a HBO miniseries by the same name.

Camp Shanks, nicknamed “Last Stop, USA,” was a large military installation that had its own newspaper, orchestra, and baseball team. Celebrities of the time, Frank Sinatra, Jack Benny, the Andrews Sisters, and Jimmy Durante were among those who entertained the troops there.

One visitor to Camp Shanks was Archbishop Francis J. Spellman.  He had been named Vicar for the US Armed Forces by President Franklin D. Roosevelt in 1939. On one of the Archbishop’s visits there in 1943,  a young US Army nurse, Lieutenant Josephine Pescatore, was in the audience.

Lieutenant Pescatore remembers the audience, of about 1,000 people, included individuals from various religious denominations. She says there was an atmosphere of apprehension in the air as those in attendance prepared for war and did not know if they would return home someday.

Archbishop Spellman gave everyone a prayer, the Act of Contrition, that he said was specially written for those in wartime.*  There were many questions from those attending the gathering, such as “What do I do if I am wounded and dying and there is no priest there to say the prayer for me?” The Archbishop told them that someone other than a priest could say it for them, or they could say it themselves.

On June 12, 1944, Lieutenant Josephine Pescatore landed on Omaha Beach in Normandy, France, as a nurse with the US Army 24th Evacuation Hospital. The evacuation hospital treated and cared for the wounded and dying as it followed the troops through Europe. As a nurse, it was important to Lieutenant Pescatore to let dying men know they were not alone. When she knew a man was dying, she would go to his bedside, touch him gently, and say the Act of Contrition for him.  She once told me … she didn’t know if a dying man had been able to say the prayer for himself, so she said it for him.

O my Jesus, forget and forgive what I have been.

* The Act of Contrition is a prayer to make peace with God.

Story as told to me by Lieutenant Josephine Pescatore Reaves.  For her service in WWII, she was awarded the Bronze Star with Battle Citations for Normandy, Northern France, the Rhineland, and Central Europe.

The US Army 24th Evacuation Hospital admitted and treated 19,313 patients in WWII.  The survival rate at the evacuation hospital was 98.39%.

In the future there will be more stories about the US Army 24th Evacuation Hospital and its people.