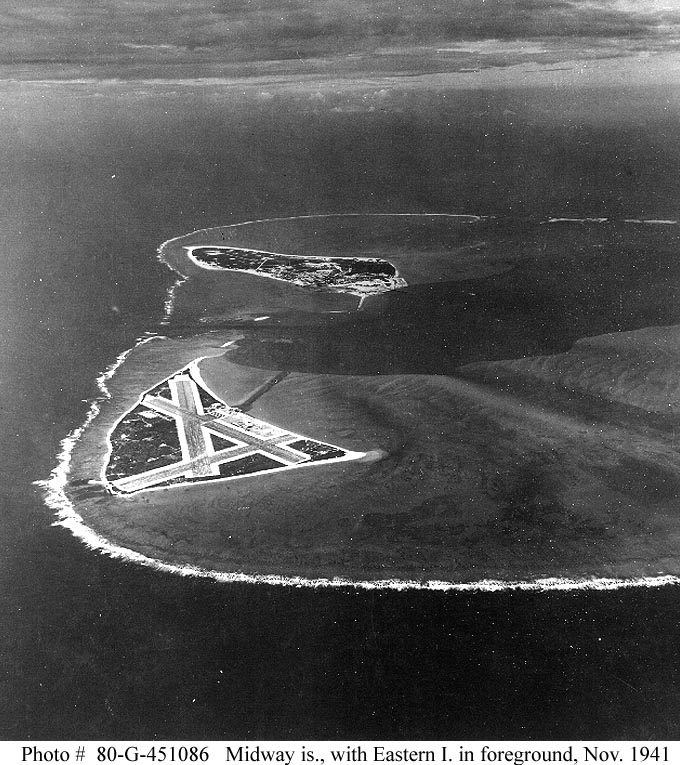 Midway Atoll in the Pacific Ocean is comprised of Sand, Eastern, and Spit Islands. It is approximately 1,300 miles northwest of the island of Oahu, Hawaii. In the 1930s Pan American World Airways used Midway as a refueling base and passenger rest stop for their Flying Clipper seaplanes that flew from San Francisco, California, to Manila in the Philippines. The United States (US) Navy established a base there in 1941.

After learning the Japanese had attacked Pearl Harbor on December 7, 1941, Midway prepared for a possible attack. About 9:30 in the evening on December 7 two Japanese ships, Sazanami and Ushio, began shelling the islands. During the barrage First Lieutenant George H. Cannon was seriously wounded in the Power Plant/Command Post when a shell came in through a window. He refused to leave the Command Post until communications were reestablished. Communications were restored, and he died soon after being evacuated from the building. First Lieutenant Cannon was the first Marine in WWII to be awarded the Medal of Honor.

The Battle of Midway, June 4 – June 6, 1942, was the first major naval victory against the Japanese in WWII and is considered a turning point of the war in the Pacific.  US Navy cryptanalysts at Station Hypo in Hawaii had broken Japanese communication codes and knew the Imperial Japanese Navy was planning to attack Midway on June 4 or 5, 1942.

During the Battle of Midway, TBD Devastator torpedo bombers and SBD Dauntless dive bombers flew off the carriers USS (United States Ship) Yorktown, the USS Enterprise, and the USS Hornet. Four Japanese carriers, the Akagi, Soryu, Hiryu, and Kaga, were sunk. Those carriers were four of the six that took part in the surprise attack on Pearl Harbor in 1941. The US lost the USS Yorktown, the destroyer USS Hammann, and over 100 aircraft.

Today Midway is a National Wildlife Refuge. In 2000, the US Secretary of the Interior also designated Midway as the Battle of Midway National Memorial.

On a 2005 WWII in the Pacific cruise our first stop after leaving Pearl Harbor was Midway Island.

At a Doolittle Raiders Reunion luncheon in 2007 I met a WWII veteran who fought at Midway. He was wondering what Midway looks like today. This post is for him.

In 1949 the Chicago (Illinois) Municipal Airport was renamed the Chicago Midway International Airport in remembrance of the Battle of Midway.