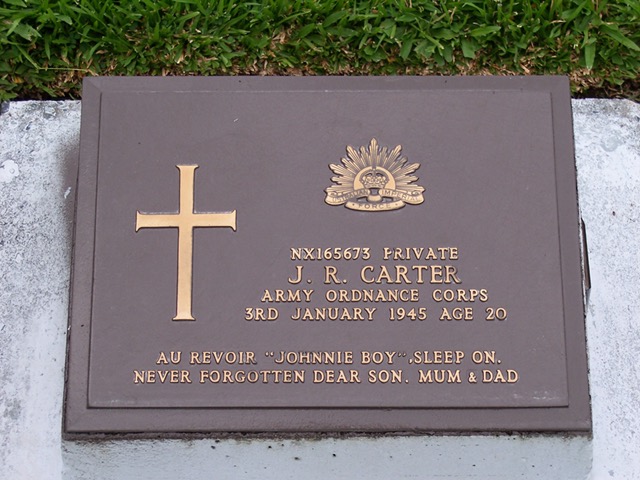 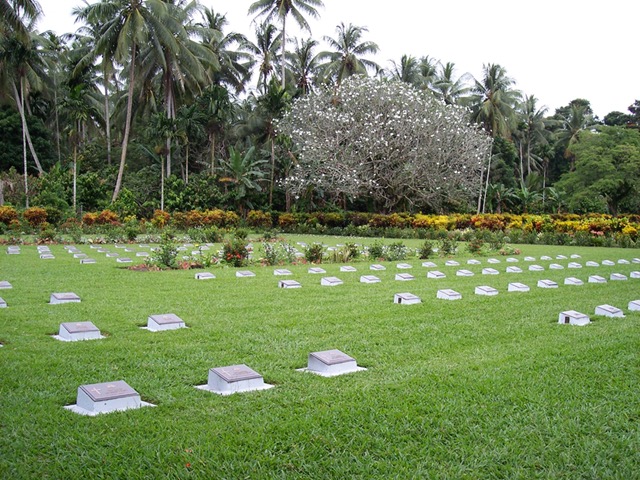 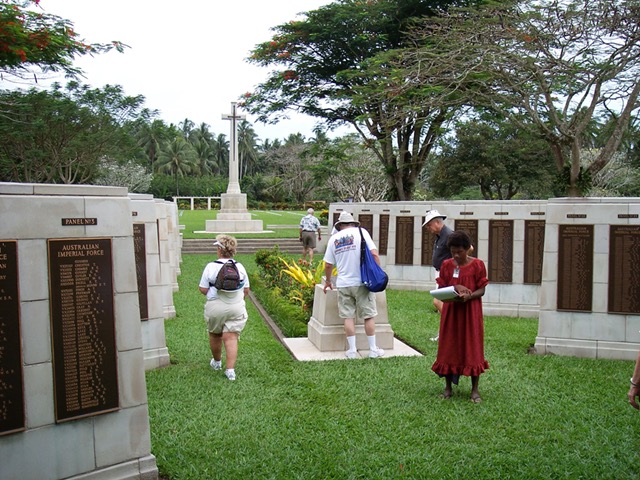 The Bita Paka War Cemetery was established by the Army Graves Service in 1945 and is managed by the Commonwealth War Graves Commission.  There are 1,120 WWII Commonwealth burials in the cemetery.

The Commonwealth War Graves Commission (CWGC) cares for WWI and WWII cemeteries and memorials in 154 countries in 23,000 locations.  Members of the Commission are Australia, Canada, India, New Zealand, South Africa, and the United Kingdom.

Sir Fabian Ware, the commander of a British Red Cross mobile unit in WWI, had the vision to commemorate the men and women who had sacrificed their lives in WWI.  In 1917 a Royal Charter established the Imperial [now Commonwealth] War Graves Commission.

The Commission established high standards as work began to design and construct memorials and cemeteries.  A literary great of the day, Rudyard Kipling, advised in the selection of inscriptions for the Memorials.

The Menin Gate Memorial to the Missing in Ypres, Belgium, was inaugurated on July 24, 1927, by Field Marshal Lord Plumer.  In his speech to those assembled he said,

“… One of the most tragic features of the Great War was the number of casualties reported as ‘Missing, believed killed’.  To their relatives there must have been added to their grief a tinge of bitterness and a feeling that everything possible had not been done to recover their loved ones’ bodies and give them reverent burial. …

But when peace came and the last ray of hope had been extinguished the void seemed deeper and the outlook more forlorn for those who had no grave to visit, no place where they could lay tokens of loving remembrance. … It was resolved that here at Ypres, where so many of the ‘Missing’ are known to have fallen, there should be erected a memorial worthy of them which should give expression to the nation’s gratitude for their sacrifice and its sympathy with those who mourned them.  A memorial has been erected which, in its simple grandeur, fulfils this object, and now it can be said of each one in whose honour we are assembled here today:  ‘He is not missing; he is here’.”

Over 54,000 names of the missing are engraved on panels of the Memorial.

The CWGC later extended its responsibility to include the war dead of WWII.

The CWGC has ensured that 1,700,000 men and women lost in WWI and WWII will not be forgotten.

In the United States there are 1,026 graves in 47 States that are commemorated by the Commission.

Rabaul, a town in East New Britain, Papua New Guinea, was a Australian naval base that was captured by the Japanese in 1942.  It became a major Japanese air and naval installation and was the most heavily defended Japanese fortification in the South Pacific.  It was the assembly point for convoys of ships, known as the “Tokyo Express,” that would race south to bring troops and supplies to areas of conflict in the Solomon Islands such as Guadalcanal.

Operation Cartwheel (1943 – 1944) was a major Allied plan to neutralize and then to isolate and bypass Rabaul as the Allies moved northward towards Japan.  Allied bombers and fighters first attacked Rabaul in December 1943.  Continuous Allied air attacks on Rabaul rendered it essentially useless in February 1944.  Bombing runs over Rabaul continued until August 1945 when Japan surrendered.